The Monsanto Tribunal took place in 2016-2017 in The Hague. Five judges delivered a legal opinion and concluded that Monsanto’s (now, Bayer) activities have a negative impact on basic human rights. Better regulations are needed to protect the victims of multinational corporations. International law should be improved for better protection of the environment and include the crime of ecocide. The entire process is documented in a brochure and  a documentary titled "The Monsanto International Tribunal, the Making of".

Journalist and author Marie-Monique Robin has documented the entire process of the Monsanto Tribunal with a film. "The International Monsanto Tribunal, the Making of" goes behind the scenes and tells the story of this extraordinary project.

"The International Monsanto Tribunal, the Making of" is freely accessible. It aims at being a tool for information and awareness-raising for a large audience, such as lawyers, human and environmental rights activists and schools and universities. You can either watch the entire movie, or select a chapter on a precise topic such as "Who are the witnesses?" or "Why Monsanto"? This movie is also available in French, Spanish, German, and Portuguese.

Marie-Monique Robin has also directed a 96-minute documentary titled "Roundup facing its Judges". It evaluates the damages caused by glyphosate on health and the environment worldwide, by following the witnesses who testified before the Tribunal. This film is available as a DVD in English, French, and German here.

In addition, the European Civic Forum has compiled pictures, witnesses' testimonies, information on the entire process of the Monsanto Tribunal and various analysis articles in a beautiful 120-page brochure. It is prefaced by Olivier de Schutter, Co-Chair of the International Panel of Experts on Sustainable Food Systems (IPES-Food), Professor at the Louvain University (Belgium) and former UN Special Rapporteur on the Right to Food (2008-2014). This brochure can be freely printed and distributed. 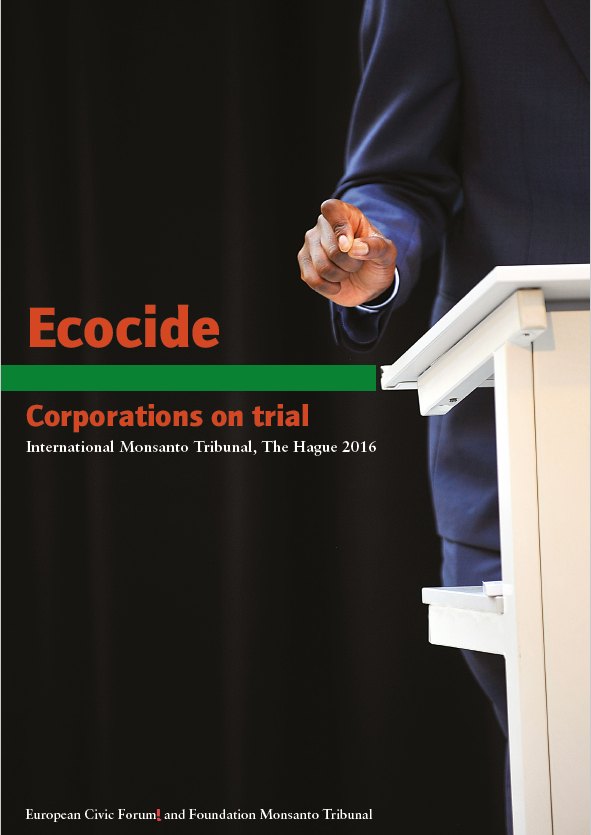 Find below all the information related to:

Parallel to the hearings of the Monsanto Tribunal (October 2016, The Hague), a People's Assembly took place to discuss strategies to counter the problems caused by industrial agriculture. It was also the opportunity for the movements from all over the world to come together and plan a sustainable future. Both initiatives received huge support from famous "ambassadors" such as Manu Chao, Nnimmo Bassey or Richard Falk.